Sorry for the long abscense! Things were really busy at work for awhile there as we were meeting a deadline for the end of March that turned into mid-May and I was putting in a lot of extra hours. By the time I got home, I didn't want to even look at the PC anymore. I did manage to get in a bit of stitching though, so I have some pics to share. :) I am on a new assignment now too - so hopefully I can get back to a more regular posting schedule.

I managed to finish all the beading for my finished Mira RR - I also took MissyAnn's advice and stitched the last mermaid myself and signed her 'Nora' for the designer. 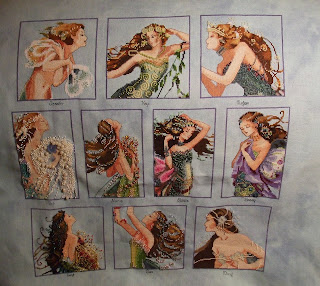 After that I received Diane's RR in the mail and stitched Ashley's Roses to finish hers. 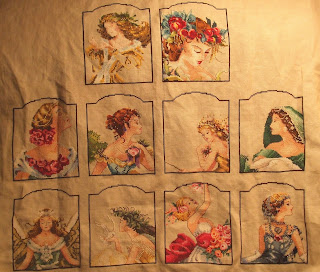 That finishes up all my stitching for the Mira RR - so I'll quit boring you with the pics of them. State Fair is my next big stitching goal and I'll be trying to finish Silkwood Manor - Just Nan, one of the Nora Corbet Christmas Couriers (haven't decided or started which one it will be yet), and a small scissorcase by Cat's Whiskers. I will also enter my Enchanted Alphabet by L&L in the large catagory. Probably too ambitious to finish all of that by mid to late July when the judging is, but I'm going to try to do as much as possible - so the next few months will probably be updates on those.

On the personal front, the job is going well - I got a very nice raise back in Feb and everyone seems to be happy with my work. I don't know about the current assignment just yet. I've only been doing it about a week and I'm still feeling out how it is going to go.

Home is going well - DH and I are getting along pretty well these days, guess we were just going through a bit of a rough patch awhile back when I posted about some of the arguing we were doing. I think I have a tendency to over-react a bit when we are fighting because of how things were *years* ago - it always feels like we are right back there. In realilty we have both learned a lot and while old habits still slip in now and again we are much better at righting things and getting back on track.

On another note DH and I are looking into buying or building a new home for spring 2009. I really want to build, but the more we look into it the more confusing/hard it seems. I know we could just buy a home/lot package from a builder and eliminate a lot of the befuddling hoops and such, but we really don't want to move into one of those cookie cutter new neighborhoods. We have been interested in a few single lots, but then there is all the issues of trying to figure out if we could get an exposure, if there will be drainage problems, what the setbacks are, whether there are utilities already there or not, and how much it will cost if there aren't, yadda, yadda, yadda...

Last but not least, we are going back to Disney in late August. We are so excited. Good thing the summer is getting so packed lately - the busyiness will make it go by more quickly. Oh, and I almost forgot Katis is 4 tomorrow! Can you believe it? Well, I can't! She is growing up so quickly!