It was a good Christmas for me. This year I pretty much shopped for myself and gave Sean the presents to wrap and put under the tree with my name on them. The stitching stuff I wanted was too specific to trust him to get on his own, and he probably would have bought the wrong size pjs I wanted. He did surprise me by buying me a new crockpot - one I had admired in the store when he was with me a few weeks back. The one I had was really old and didn't have a lift out container, so it was nice to have it replaced. :) I also had to laugh when DH gave me the gift in my stocking - I always say it isn't Christmas without a little chocolate and he bought me a box of assorted chocolates in WHITE chocolate. Now, I like white chocolate okay, but it isn't REALLY chocolate, ya know? But with everything else being so nice - I couldn't complain. :) My grandmother gave us a box of assorted caramels in milk and dark chocolates, so I got my chocolate anyway.

I also got new silverware from my mom - I've never had a new matching set all my own before - just have always used an old mismatched set that Sean and I had put together from cast offs from both our families.

My dad just gave us cash - which was nice cause we'll just use the money to offset our Christmas spending - hey who can't use less bills!

My sister went above and beyond - she had DH's name in our family exchange and went to his favorite restaurant - which is local to where she lives, but not to where we do - and bought him an entire pie (14 pieces!) of his favorite dessert from that restaurant. Her BF has connections with the owner, cause they don't usually sell desserts except to sit down dinners and certainly don't ever sell an entire pie. She also gave him some tickets to a ball game. WOW! If I didn't know better (don't worry I DO know better!) I would think sis is trying to steal my man. ;) It was really nice cause Sean really felt part of the family having someone know him well enought to give a personal gift like that. Even though we have been married almost 12 years, he has always been sort of shy with my family and although I think they are welcoming enough, it hasn't been until recently that he's felt more "a part of the family". I'm probably not explaining that right - but I just got the feeling it really meant something to him - and not just oodles of calories!

We were able to give the kids a really nice Christmas this year too. And we didn't spend that much more than we have other years. The last two years before this were kinda skimpy cause I wasn't working and DH was trying to work a job that basically only paid a skimpy commission. This year we are both gainfully employed and there was enough to buy much more than we did, but we didn't want to spoil them too much, while still providing a bit of a WOW factor.

Katie got lots of gifts, but her favorite thing was a $15 Playdoh table from Walmart. She played at that thing most of Christmas day and has been harrassing me every spare moment since to play with her playdoh. I set it up in the kitchen corner so that any stray playdoh lands on the linoleum and not on carpeting. It came with some markers that she used to mark up all 10 pages of paper that came with the table in addition to marking up her clothes! Luckily the markers seem to be washable, or at least running the stains under hot water and using a bit of detergent removed the marks. She also got a singing Dora from Grandpa, a Barbie and clothes from Grandma, and a plastic play cellphone from Aunt Karen. She is always talking into that phone too!

Alex got an Air Hockey table for the basement, several transformers, an RC airplane that I found on clearance back in October for $20!, and an mp3 player. He was most excited about the mp3 player. It is a cheap starter version and not anything fancy, but he is excited to be able to put his CD collection onto it and be cool listening to his player.

The only thing we got I didn't want is a nasty cold! Katie brought it home from daycare and was sick all Christmas Eve and Christmas Day - she was slightly better yesterday, but still tired and congested and as usual she doesn't eat much when she is sick. I came down with it yesterday, and am pretty wiped out today. I only came to work because no one else is here for me to give it too, and I don't have the vacation day to take it off (all our vacation and sick days come out of the same pool). Alex is home today, and when I called him for lunch he is coming down with it too. Sean was complaining of a scratchy throat when I left this morning, so I suspect we'll all have taken our round by the time it is through. *sigh*
Posted by Jenny at 12:48 PM 2 comments: 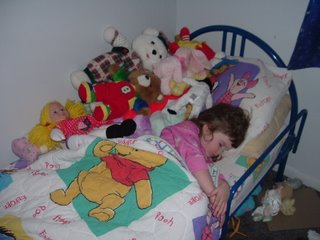 Recently I've had trouble getting Katie to go to sleep at her assigned bedtime of 8pm. Rather than pull my hair out in frustration I've allowed her to play in her room with only the nightlight on and a gate up so that she has to stay in bed for awhile before she falls asleep. She still goes to bed at 8pm, but I usually hear her playing in there for at least 30 min., sometimes an hour before it goes quiet. 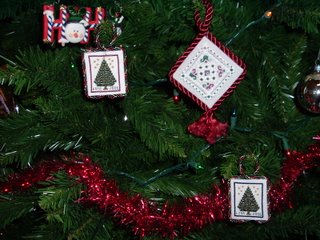 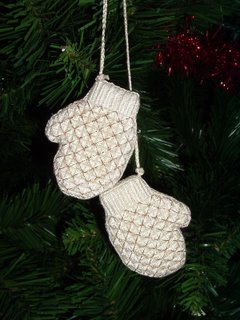 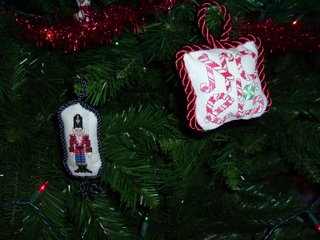 These are the ornies I've finished so far. I have two maybe three more to do, we'll see whether I run out of steam on that one. I'm really pleased with how they all came out. All the ornies are from issues of JCS Ornaments. From the top we have a hardanger ornament by Nordic Needle, the two tree ornaments are from Elizabeth Foster, the mittens are from Calico Crossroads, the NOEL design is by Sue Hillis, and the Nutcracker is by Just Nan.

The mittens are my favorite - I've put off doing them for years because the finishing looked hard. If you've been intimidated by the finishing for these - don't be - it was much easier than it looked and seemed to just fall together just fine. However, the stitching itself was very time consuming. Seemed that those four mittens I stitched to make the front and back of each mitten took a lifetime to complete! I'm keeping that ornie for myself - the rest will be given away as teacher gifts or to family members with their bigger gifts.
Posted by Jenny at 6:25 PM 7 comments:

Conversation #2
Katie is pretending to talk on the phone holding her hand to her ear – meanwhile I’m trying to get her to go potty and change into her pajamas for bed.
Katie (into the “phone”): “Yeah, put my jammies on, take my shirt off.”
Me: “Sit on the potty and try to go pee pee.”
Katie: “Shhh, Mama! I’m on the phone.” Exasperated sigh
Me: “You are? Who are you talking to?”
Katie (sounding even more exasperated): “Mama, its my hand!”
Posted by Jenny at 10:31 AM 2 comments: 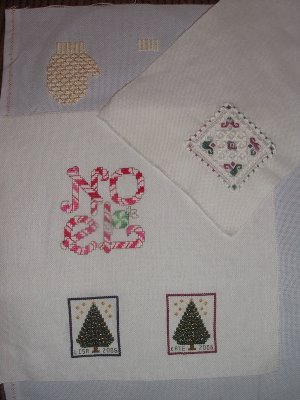 They aren't finished and I'm hoping to do some more before Christmas, but here is what I have so far. Thanks to the snow day I was able to finish one of the little Christmas trees and the Hardanger ornament. :) The Little Christmas trees are by Elizabeth Foster, and the Hardanger ornament is Nordic Needle, The mitten is Calico Crossroads and I cannot remember who designed the NOEL offhand. Will have to look that up and post later when I finish the ornaments. I have been wanting to do the mitten ornament for 5 years now since it came out in the 2001 JCS ornament issue, but have always been intimidated by the finishing. Decided to just do it this year finally. I really like how it is coming out so far - only I have to stitch 3 more of those mittens to make front and back of a matching pair to hang on the tree! It is time consuming, but I really like this ornament, so I'll plug on. Hope to show some more pics when these and any others I get to are all done and finished! :) The little trees are for Katie's teachers at daycare, the mitten is for me (with all that work!) and I haven't decided what to do with the others yet. Likely one will go to my SIL in VA and one to my sister whose name I drew in our family exchange. I like to include a hand stitched ornament on the package for our Christmas exchange.
Posted by Jenny at 6:21 PM 5 comments: 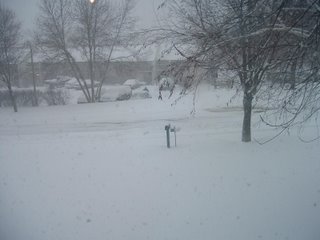 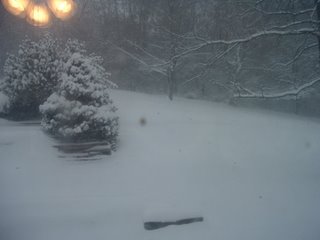 These are the views out my front window and back patio door this morning. All the area schools have been cancelled and there is a blizzard warning in effect until 3pm. So all four of us are staying home. Since I have the vacation day to take - I'm not risking it on the highways. I plan to spend the whole day watching movies and stitching Christmas ornaments!! :)
Posted by Jenny at 8:17 AM 6 comments: