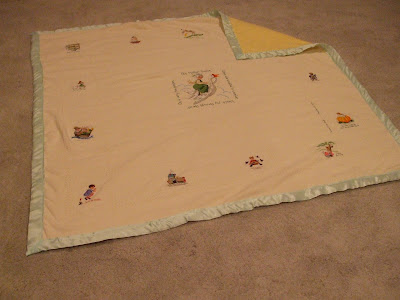 The back is a plain yellow fleece and the binding is an ordinary satin blanket binding I got at JoAnn's.

I just hope young Teresa understands Aunt Jenny is a much better stitcher than she is a sewer - the satin binding was really hard to keep straight. I think the result is passable, but I'm sure a more experienced seamstress would have done much better. Ah well.
Posted by Jenny at 9:33 AM 7 comments: 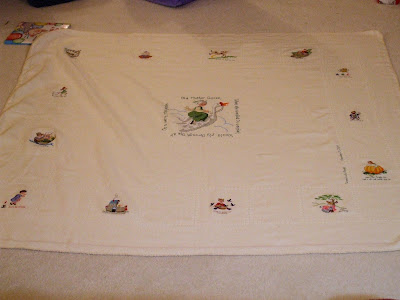 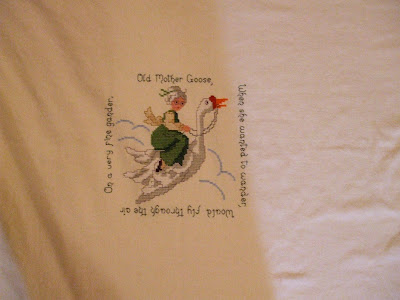 All the stitching is done on the afghan! Woo Hoo! And not a moment too soon. My sister had her baby yesterday morning at 4:30am. She had a little girl they named Teresa Lucia. They don't find out the sex or reveal the name of the baby til it is born, so usually I don't get a chance to include any name or anything before finishing the blanket. The timing worked out this time that I was just finishing up when she was born. The text along the side of the center is the baby's name and birthdate. :)

I'm planning on doing the finishing tomorrow as I have off from work. More pictures once I have it all blanketified.
Posted by Jenny at 6:43 PM 6 comments:

Finally! Now just Mother Gooser herself and this afghan will be ready to be finished into a blanket. :)
Posted by Jenny at 5:36 PM 3 comments: 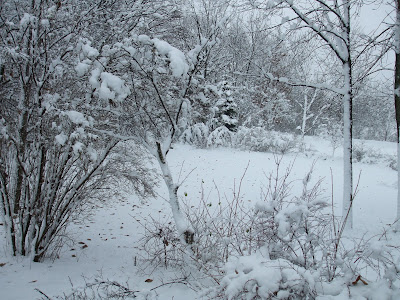 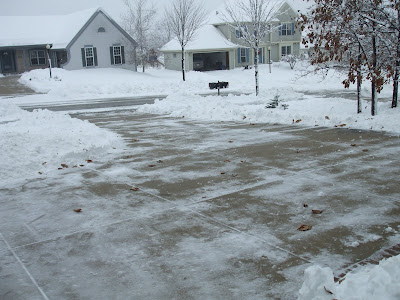 As many of you know, there was a big snow storm in WI Tuesday into Wednesday which resulted in a day home from work and school. I spent the day shoveling the heavy snow the blower couldn't get at the end of the driveway, and then stitching 6 over one letters on Chatelaine's Heritage Sampler. Good thing I have no deadline for finishing this thing - there is a ton of over-one letters! :) 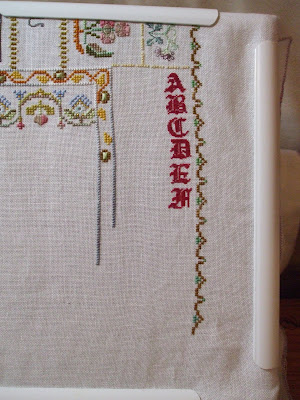 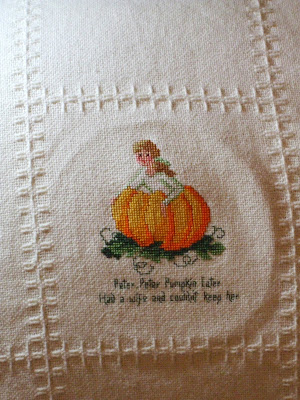 I'm afraid to say so, but I think there is a light at the end of the tunnel. Only two more small squares left and they are both rather easy. Then the large center design of Mother Goose herself, which is going to be over-two, so it really isn't that much harder/bigger than the small squares. I'm thinking it will take about as long as two of the small squares. Anyway, getting close now. And no obligation stitching for 2010! (Well except for the Mira RR I'm already stitching for.)
Posted by Jenny at 7:41 PM 4 comments: 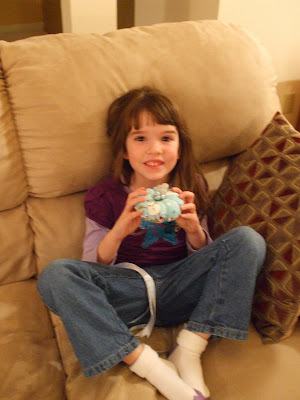 Well, that is what Katie said anyway. :) Actually she said, Mrs. {Missy's last name here} is the awesomest, but I don't want to post the name here. :)

A few days back Katie was watching over my shoulder while I read Missy's blog, and insisted I buy the pincushion that Missy just made. She thought it was so pretty. :) I explained that Missy had made it for herself and that it wasn't a store or a sale, but her own pincushion. Katie was very put out, but suggested maybe we could go to Missy's house when she has a yard sale and buy it from her. I thought that was pretty funny and told Missy the story in the comments on her blog.

Missy made her a pincushion and sent it complete with a note telling her how Santa called and asked her to make her one because she had been trying to be such a good girl. Katie was a little suspicious and didn't seem to think Santa could possibly know about the pincushion, but I think I convinced her saying that Santa must have been making his list and checked in on her while we were looking at it on the computer. Little too smart for her own good I think. *sigh* 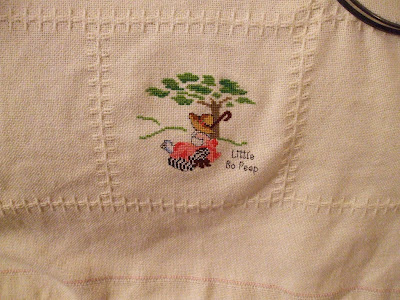 Only 3 more little squares to go, then the big one in the center. Mother Goose herself goes there.

Also, I'm trying to come up with a creative way to include the year for the baby. I usually put "Baby [last name] 2010" somewhere on the completed afghan where it won't look too out of place. Right now the best I've come up with is the lower right square which will otherwise be empty. It won't look exactly right though cause that square should be empty to keep the every other square stitched pattern I've got going.
If anyone has any bright ideas, please feel free to share. :)
Posted by Jenny at 6:15 PM 1 comment: