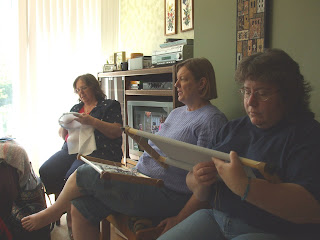 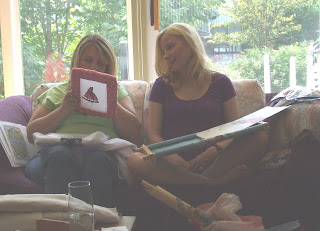 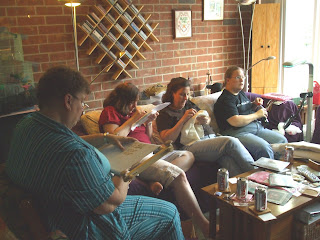 Susan graciously agreed to let us all invade her home for about 7-8 hours on Saturday and it was a great time. Good pizza, good desserts, good friends, good conversation, and good stitching! We also spent some time showing off out WIPs and finished stuff and rifling through some stash. Can't think of a better way to spend a Saturday. :)
Posted by Jenny at 6:12 PM 7 comments: 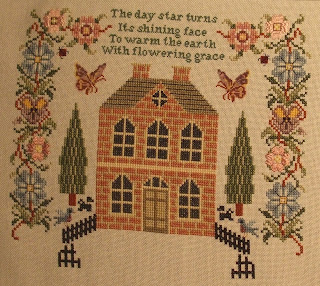 As you can see, my Silkwood Manor is coming along pretty well - just need to stay disciplined enough to stitch everyday and I should have no problem finishing it in time for the fair. Now, whether I'll have time to also stitch another reindeer is still up in the air - but I'm going to give it a try. I've chosen Cupid to do next, mainly because I have all the "extras" for him and I think he will stitch up the quickest! :)
Posted by Jenny at 7:34 PM 7 comments:

I know this isn't a big deal to anyone but me, but I'm so excited about my new kitchen sink! This old stainless steel sink you see in the first picture has been a thorn in my side since we bought this house. The sink just looked cheap and junky to begin with and on top of that whoever installed it did a crappy job and didn't seal the drain basket on the right side properly. The water would pool around the seam and if you weren't careful to rinse and dry it constantly some really stinky black mold would begin to grow. I was forever after Sean and Alex to not leave any dishes in that side because it would cause mold to grow faster - seriously yucky. I put up with that since late 2001! I don't know why we didn't replace it right away, just always something else to put the money into I guess. 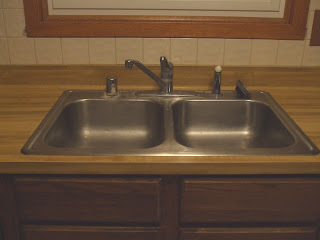 Since we are now thinking of selling our house, we're finally getting around to all those random household maintenance projects, and this was definitely on the list. I bought this sink from Home Depot online, the faucet set from the actual Home Depot brick and mortar and called a local handyman to come install for us. Part of what took us so long (besides some admitted laziness) was we weren't sure how to get someone to install it for us and we were too nervous to attempt putting it in ourselves. I should say Sean was too nervous - I generally try to do stuff myself when I can, and this didn't look too complicated, so I was game to try. I think Sean had visions of water spraying everywhere and us not having the know-how to turn it off. I knew that while I could probably figure out how to turn the water on/off and glue in a sink and connect it back up to the water lines and drainage pipes, it would probably take way more effort and stress than I wanted to put forth.

In the end it was good I called a handyman because the drainage system had old PVC and when he tried to connect it back together, one of the plastic rings broke. That wouldn't have been so bad - buy a new one right? But the new one was the same size and the threads still didn't match up correctly. Sooo he had to rip out the connecting PVC and replace with new. That would have been too much for me I think, although I might have been able to flounder through it would have been very stressful and I'm glad someone who knew what they were doing had the experience rather than me!

Anyway, here is the new sink all installed - icing on the cake is that the hoses for the dishwasher and aerator also got cleaned out (since we were taking apart anyway) and now there is no more leaking down from the air gap into the sink (see white calcium deposits from our hard water on the gap in the first pic) and that won't mess up my new brushed nickel finish on my new faucet. 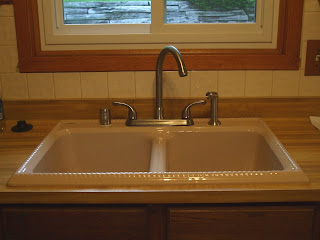 The new sink is acrylic which looks like ceramic tile, but is more durable. This is probably too nice for the rest of the house - but was really only about $100 more than having another stainless one put in (the whole thing material and labor was still less than $500). We wanted something really nice to show off our big, but otherwise unremarkable kitchen for potential buyers.

The new sink is deeper than the old one too! The old one was only about 7 inches deep! This is 9 inches. Also the new faucet is an arced one, so I can get my big chilli pot under the faucet now with no problem. I told DH that if we build we are putting this sink in our new house too! :) 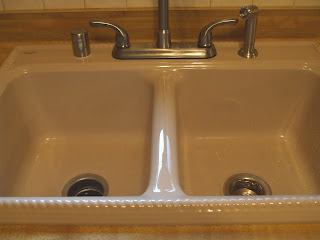 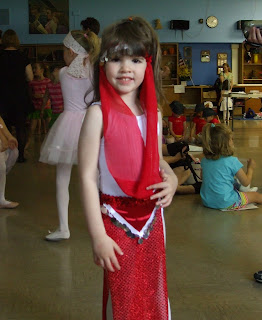 *Shameless mom brag ahead* Katie just finished her first recital today. She is in a Turn n' Tumble class at the Y which is half ballet and half gymnastics. She's been doing that class for about 6 months and seems to really enjoy it - especially the gymnastics. All the dance classes at the Y give a recital every June and they include the Turn n' Tumble class since they do ballet too. Katie's class was one of the youngest and they danced some very basic ballet moves to "A Whole New World" from Alladin - hence the Jasmine like outfit. All the little girls (ages 3 - 5) did really well - we were hoping just that they wouldn't all stand there and do nothing and luckily they didn't. I cannot say any of them is ready for a professional academy, but they did quite well for their age. There was one minor hiccup where the girls were suppposed to toe-walk around the stage and the little girl in front of Katie didn't realize that is what was happening and just stood there - Katie gave her a little shove to get her going and the audience just roared with laughter. I was pretty impressed though that they all even got there little ending pose right. *End of shameless mom brag* :)

I've been working on my Silkwood Manor and it is coming along pretty well - Since my last progress photo I did two flowers on each side of the border and worked on filling in the house. I'll finish filling in the house and do the two trees on either side next. 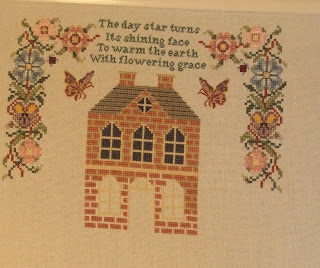