My Mirabilia RR is home :) 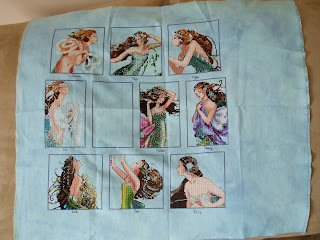 I love how it turned out! Every bit as gorgeous as I imagined. Now to find someone to stitch the last section, and then get it all beaded and framed. :)
Posted by Jenny at 12:17 PM 9 comments: 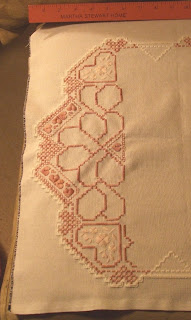 I'm having the hardest time staying motivated for this piece. Lately, I've been working on each piece for a week's rotation before moving on, but I just couldn't do it with this piece. I made a deal with myself to finish the hearts on each end at least, and I did manage that. I really like how it is turning out, but some reason I just don't like working on it right now. *sigh* For me, those feelings usually come and go with a project, so maybe I'll be more enthused to work on it next time. For now, I've moved on to my "Angel of Summer", which is also a piece that isn't a big favorite. I'm doing her for my mom who always really appreciates my stitching though, so I guess I'll keep slogging on for her. At least I'm starting to feel like I might one day finish AOS, so that helps my motivation. With the Hardanger runner I just feel it will never end!
Posted by Jenny at 12:56 PM 6 comments: 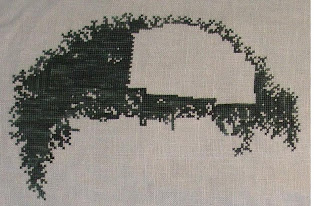 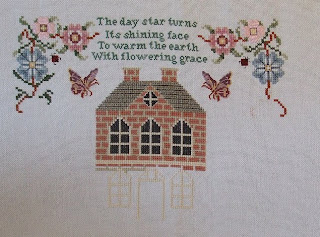 I finished a rotation on Mother's Tree, and unfortunately I'm not really feeling like it was a lot of progress. The tree just seems endless right now. I worked on filling in the left side. I thought about trying to work on some of the names for a bit to break up the monotony, but I was too afraid to try to count out that far. I just know I'd mess it up. Maybe next time I'll at least do the trunk of the tree so that I'm closer to where the names will go and I can start them before finishing all of that dang ole tree. :)
Since I had the camera out to take the pic of Mother's Tree, I went ahead and took a quick progress pic of Silkwood Manor too. Mother's Tree is on 36ct Peaceful Waters Endinbourgh from Silkweaver, stitched with Dinky Dyes Evergreen? silk floss. Silkwood Manor is on 28ct Joblean, I forget the color name, but it is a light blue if you cannot tell from the pic.
Posted by Jenny at 9:48 AM 6 comments:

Really, maybe it is just me, but last time I checked most people generally try to be nice to the person they are trying to have sex with. Right? Or did the whole world just go upside down on me or something?

We had a really nice Valentine's day until bedtime. Dinner at a local chain pizza place with the kids, cards and chocolates, watched LOST together, one of our better nights. Once we are in bed, he makes his move and I'm pretty much inclined to oblige. Until he touches me with his really, really cold hands. I jumped sky high - did not say anything mean - just startled. I was completely planning on continuing. He goes off about how negative I am, and blames me for everything under the sun. Yeah - instant aphrodisiac. I said a few not-so-nice words myself about how he could finish his evening (sans me) and that was the end of that. He hung around a bit not saying anything I guess waiting for me to re-initiate things, but when it was clear I wasn't about to - he went and slept on the couch, and I was relieved to be rid of his toxicity.

The strange thing is that stuff like this happens a lot, and usually I'm really hurt by it. This time it just seemed so absurd. Just felt sort of outside myself like I was watching this really interesting movie/situation, and the absurdity of it all just made me want to cry/laugh/scream/explode, but yet I didn't really feel overly emotional. I dunno, I'm probably not explaining that very well.

Of course we haven't spoken since mostly because we get up to go to work at different times, but we did pass in the hallway right before I left and as he was just getting up. He seemed to make a point of talking to Alex and not to me, but this was really only a 30 sec. timeframe. Now I'm wondering if he is going to act like he did after our fight on Sunday and not talk to me for a few days and claim that I was the one to go off the deep end. Usually this is his attitude when things aren't going well. I just hate all the tension it creates and I know the kids pick up on it too, even though we are both pretty good about not really fighting in front of them.
Posted by Jenny at 4:34 PM 3 comments: 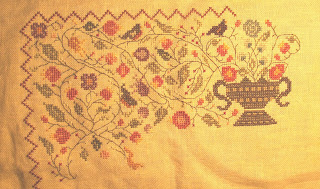 This photo is a little darker than I'd like, but darn I cannot for the life of me figure out how to take better lit shots close up with my new camera. My old 2megapixel seemed to do much better than the new 8mp. *sigh* It takes great snapshots though, just not good needlework shots.
I also have some recent progress on Silkwood Manor, but I was too lazy to take a new pic so you'll have to wait until next time I work on it to see a new picture. Seems lately life has been really busy and I don't get enough time to stitch or post! The good part of that is that my work is being recognized at work and I got a nice fat raise at my review a few weeks back. Can always appreciate that, right?
Since I did get a nice raise at work, and DH got a nice raise too (not as nice as mine though!), DH could no longer ignore my pleas to make a return trip to Disney this summer. So we are going 8/23/08 thru 8/31/08. I know it will be really hot in Florida that time of year, but I just don't want to take Alex out of school again. He is doing really well, but he is a kid that has to work really hard to do well - it doesn't come easy to him - and I don't want to stress him out trying to make up a week's worth of work.
Things with DH are still a bit rocky right now. We had a huge fight on Sunday about pretty much nothing, but I blew up at him because I couldn't take the constant criticism anymore. Of course as soon as I've blown my stack, the fight is only about that and not about all the millions of jabs and nasty things he's done/said in the time leading up to it. Drives me bonkers. I always end up apologizing for the things I've done wrong (and I know I should be able to control my temper better sometimes) while he just withdraws and refuses to talk to me claiming he is 'scared' of me - yeah, right whatever. (He says he is scared because I threw my car keys on the ground and somehow that is violent - I could understand a bit if I threw them at him, but I digress.)
We did make up though finally, after 2 days of him being "afraid", and generally emotionally unavailable and passive agressive, and me crying my eyes out wondering how after 13 years of building my life around this sap, that a few harsh words have me 'unworthy' of his love/attention/understanding.
He did finally admit to his part in it and also admitted that my "outbursts" (which is really just me yelling at him for 30 seconds about how I hate being critisized) are fewer and farther between than they have been in years past. He thinks things are all roses now - but every time we have one of these experiences I'm just left feeling really resentful at all the pain I just went through for what would have been a very minor incident to any normal person. I make up with him because he'll stop being nasty and rubbing salt in the wound when I do, but I don't feel close to him or like I love him. And it is just so hard to get him to admit that yeah, maybe he was being mean/unreasonable when he was sarcastic and nasty about me not getting the doors open fast enough, or not getting in the left turn lane fast enough to make the green arrow in traffic. (Don't get me started on how I have to drive everywhere cause he is too "stressed".)
*sigh* I guess I just needed to vent that all out somewhere - feel free to ignore.
Posted by Jenny at 3:32 PM 5 comments: