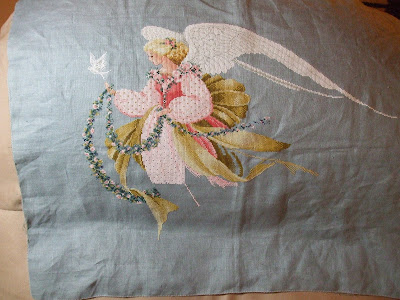 Meet my new focus piece. I started it for my mom a few years back and I think it is time to finish her up. This time I worked on the greenery hanging down from her hand to that yellow sash - also finished the sash. That greenery is a real pain! I'm going to stitch some on Rosewood Manor's Inspiration next, but then I'll be back to this. I'm going to alternate it between my other pieces until she is finally finished. :)
Posted by Jenny at 6:50 PM 10 comments: 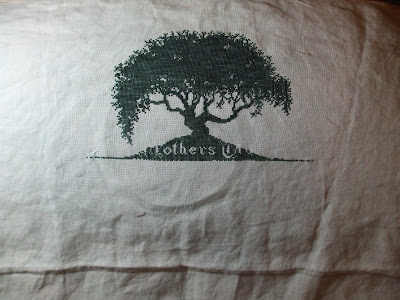 I think I will now just mark where I will start the names and call it quits for now on this one. When I began stitching this piece I had decided to use the dark green you see and a lighter green for the non-dark green lettering. I've decided I really do want to keep the shading as it was designed and therefore I need two shades of lighter green for the lettering. Lucky for me, it just means ordering a third color of Dinky Dyes silk, which is what I am already stitching with: 052, 051, 050 for the curious. 52 is this color you already see, and I needed to order 50, as I had originally planned to just use 51. Anyway, it is going to take a bit for the silk to arive and I am ready to move onto something else for a bit now anyway.

I think I will stitch on my Angel of Summer next as she is the closest to a finish in the WIP pile.
Posted by Jenny at 5:02 PM 8 comments: 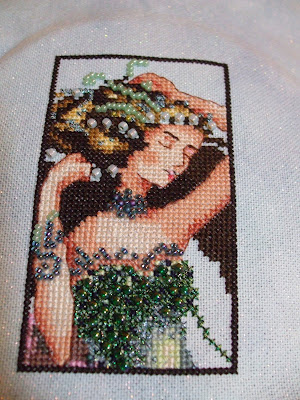 Here is the latest section for the Mira RR all finished up! :)

I think for my next act I'll try to get a little stitched up on Mother's Tree. I think I can finish the tree this time if I put my mind to it. :)
Posted by Jenny at 7:59 PM 8 comments: 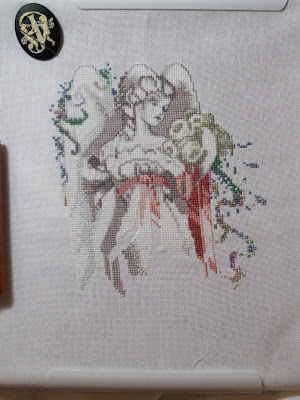 Last year I started Stone Roses on New Year's Day. This year, instead of starting a new project, I decided to get some progress in on her because I really enjoy stitching her. Just. for. me. :)

I spent far too much of my stitching time in 2009 on obligation stitching, so this year my main stitching focus is to stitch what I want on my own projects. The only obligation stitching I'm doing in 2010 is to finish up the Mira RR I'm currently involved in. I don't think of that as too much of a hardship though - I love Miras to begin with, so meeting that obligation is not going to be too tough. :) But that along with the baby blanket I just finished meant that I didn't get in much progress on all my WIPs in 2009. I'm afraid the blanket was my only major happy dance for 2009 and I missed competing in State Fair because I didn' have anything to enter.

So anyway, no new obligations for 2010! I just want to focus on finishing as many of my current WIPs as possible. I may have a new start or two - but only as I finish something else. I spent the first three days of 2010 loving to stitch Stone Roses. I'll spend the next few days finishing another section on the Mira RR and then I want to get some progress in on each of these other WIPs:

The hardest one to work on is going to be the Hardanger Table Runner - I think it is just sort of an "I don't love you anymore" project, yet I've done so much I cannot just not finish it either. *sigh* maybe a little at a time?..