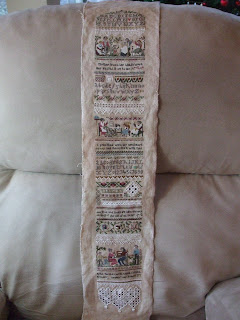 Okay, I know I haven't been around for awhile on the blog.  But I do have a good excuse!  I found out in early August that I'm pregnant! Probably many of you know that already from following me other places, but I think I have a few readers that just follow the blog so figured I better explain my abscense.  I just haven't been stitching as much or felt much like writing since I found out- fatigue, nausea, and just general business and laziness have gotten in the way.  I did finally manage to get in a little stitching though and actually finished my Heirloom Stithching Sampler.  I probably could have finished it months ago, but see above reasons - also I was procrastinating at learning the drawn thread hemstitching portion.  I had never done it before and I wasn't crazy about the look of it from the picture that came with the chart. 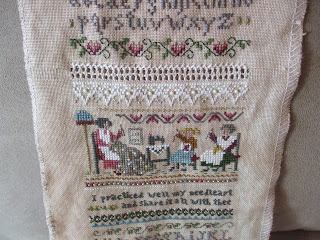 So I dug out some reference books on needlework I aquired ages ago and found the directions for hemstitching and changed the larger band to what you see in the photo above.  Still Hemstitching, just  a little different than designed.  I also changed the smaller band further down, but I made that one four-sided stitch which I thought looked nice also. :)

So I'm happy to have one more Happy Dance for 2011 - I had hoped for more, I only finished Alhambra Garden and this one this year.  I'm due on April 15 - so I think it is unlikely I'll finish too much in 2012 either, but one can dream. ;)  I think I'll focus on Mother's Tree next as there are just about 5 names to go, so I should be able to finish at least that one.  We'll see.

As for the Disney Diary - not sure whether I'll pick that back up or not yet.  I'd like to chronicle our last trip, but I'm afraid I let too much time pass and I won't remember all the fun details I usually like to include.  The good news is that with another baby on the way, there eventually will be another trip.  We had thought with Alex going off to college in a year and a half that maybe it'd be out last trip.  But now we cannot never take the youngest - which by the way is a girl.  I think Katie is going to love being a big sister and showing her Disney in about 5 yrs or so. :)
Posted by Jenny at 9:55 AM 11 comments: